Three Rivers Park District, in partnership with the City of Bloomington, offers a variety of golf instruction opportunities aimed at new adult (and youth) golfers at Hyland Greens Golf Course, 10100 Normandale Blvd. Visit blm.mn/golf-lessons for more details and to register.

Parks and Recreation offers a wide variety of adult sports leagues and programs throughout the year. The sports are offered at different levels of play; there is a sport for everyone from beginners to serious players. General information including registration is listed below. Click each sport for additional specific details.

Teams play a ten week regular season schedule and a single elimination playoff. All games will be officiated by two officials. Games are played five versus five. All participants must be 18 years of age or older. 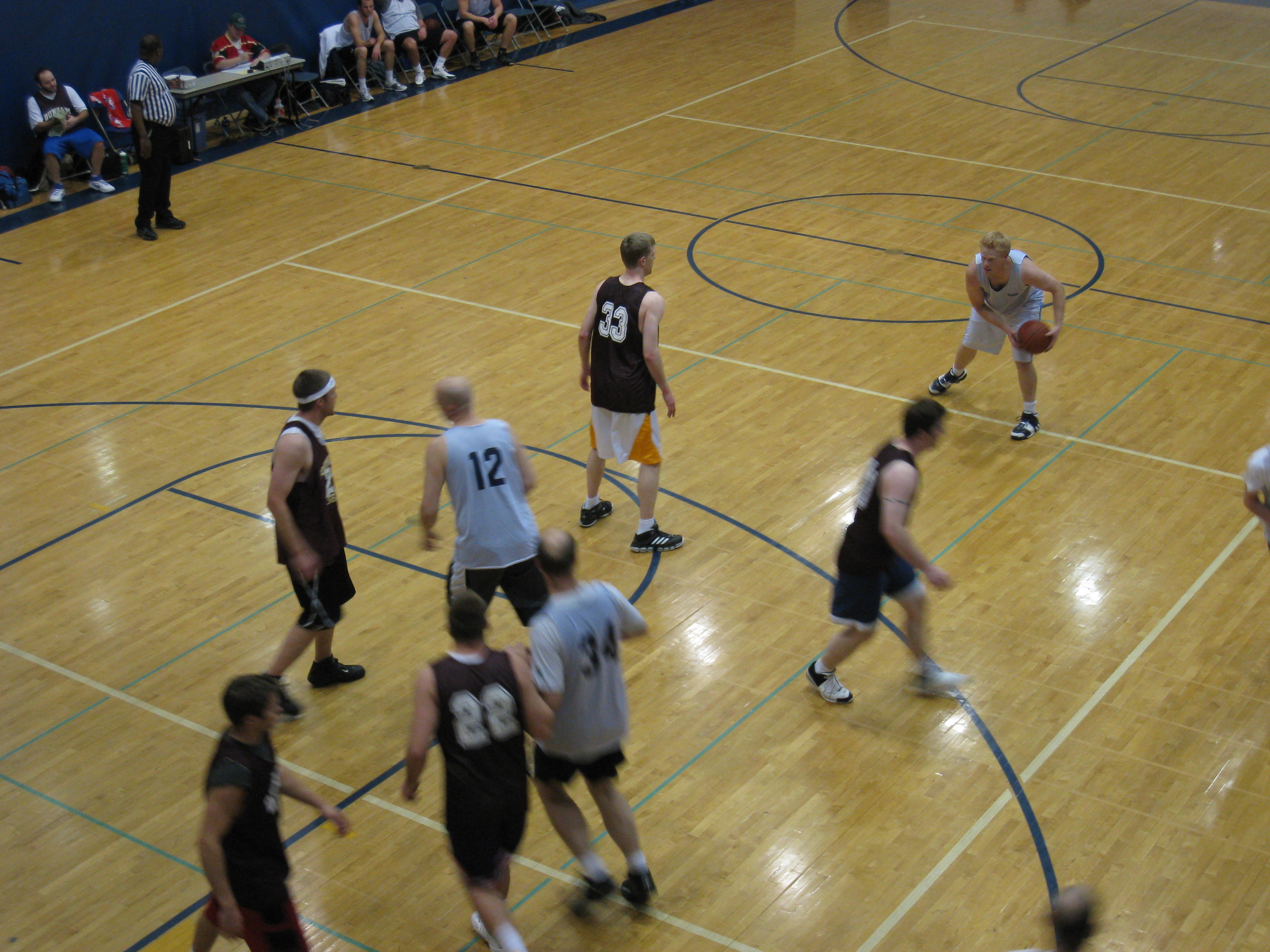 Grab your friends and join us for a blast from your gym class past with our kickball league! Co-Rec teams will play a ten game regular season, with a single elimination playoff with officials and bases. League fees includes: kickball (1 per team), scheduling of a field, game officials and league championship prizes. This league is offered through the collaboration between the cities of Bloomington and Richfield. 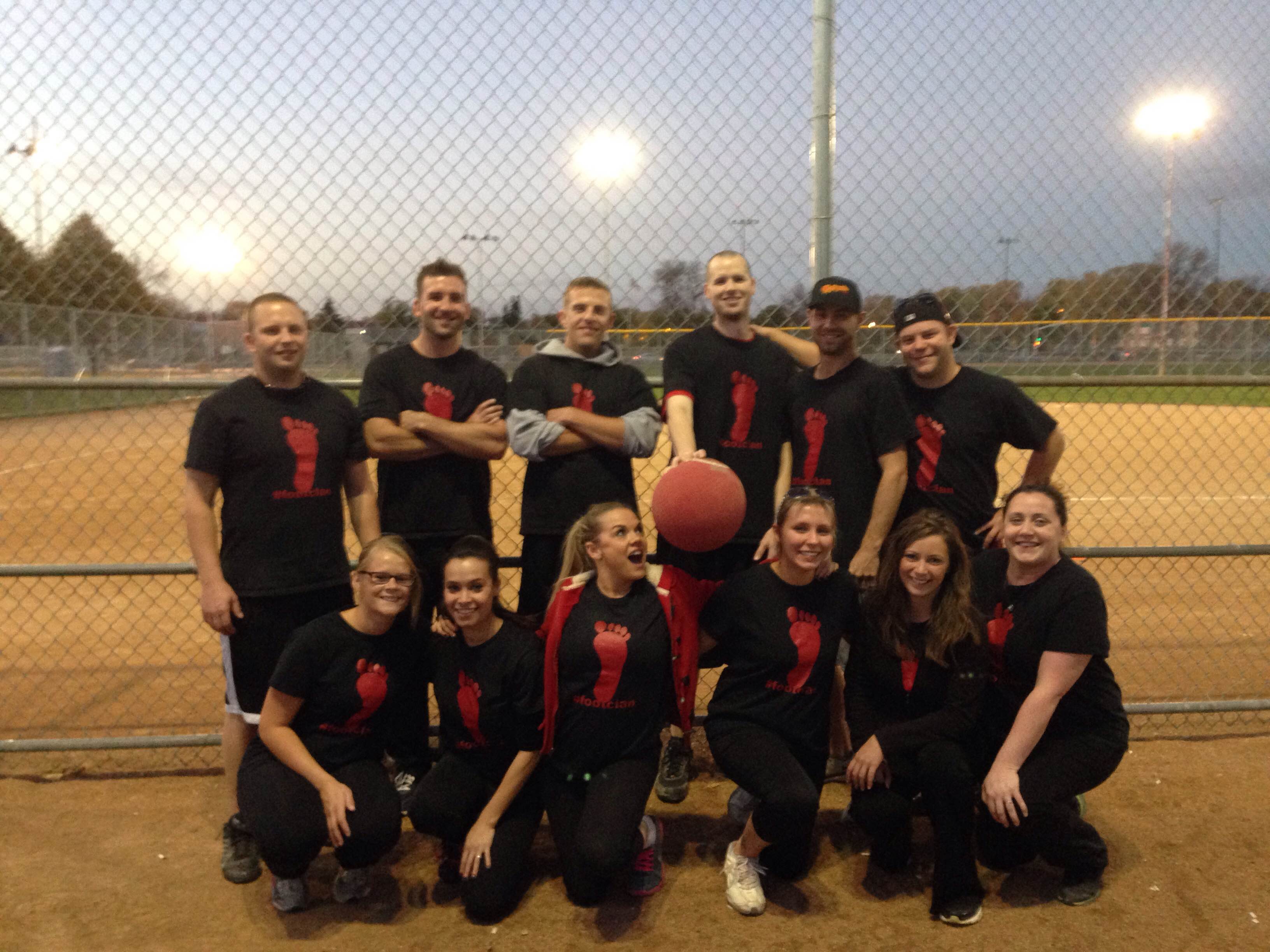 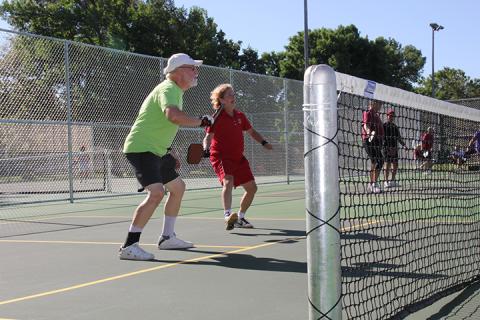 Pickleball is a racquet sport; much like a combination of badminton, table tennis, tennis, racquetball and similar sports.

Pickleball is played on a court about one-third the size of a tennis court. The ball we use is a whiffle ball. The racquets we use are similar to table tennis paddles, but a little larger and built to handle the larger ball; but smaller than a racquetball racquet. The net across the court is like that on a tennis court, but just a little lower in height. And the markings on the court are much like those of a tennis court, badminton court, or table-tennis table.

We play games to eleven points, you must win by two points. Doubles play is the norm, but singles is growing in popularity. 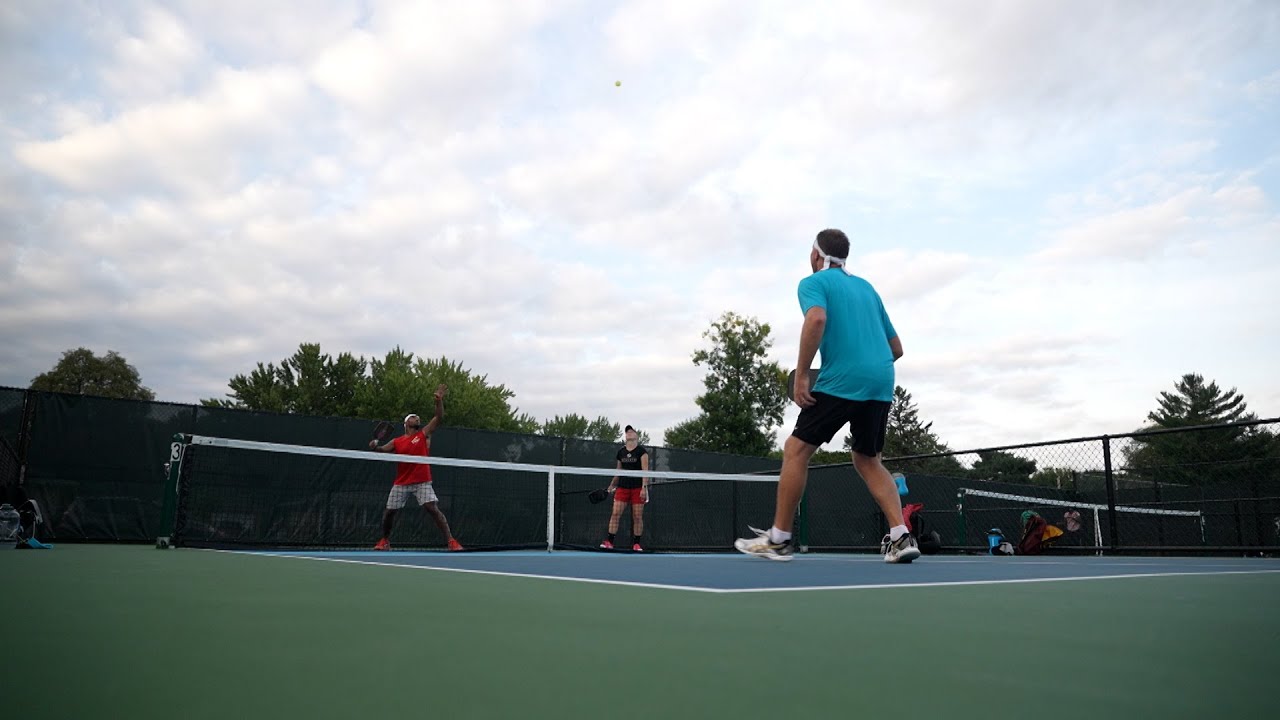 Get information about pickleball and other summer leagues in the 2022 Summer Adult Sports Leagues flyer.

The pickleball ladder allows users to schedule matches on their time in an environment that allows both casual and competitive play. Matches are to be played twice a month to maintain standing and are scheduled at an agreed upon location between all parties involved.

Schedule subject to availability. Check the Armory schedule for details.***

Monthly passes may be purchased online or by calling Parks and Recreation at 952-563-8877.

*Armory closed on national holidays
**The City of Bloomington leases space at the Bloomington Armory, please be respectful of the National Guard, its staff, equipment and building. NOTE: Effective December 31, 2022, the lease for space at the Armory expires and City of Bloomington Parks and Recreation pickleball play will not occur there beyond that date. For any questions, please call Parks and Recreation at 952-563-8877 or email us at parksrec@BloomingtonMN.gov.
***There will be scheduled leveled open gym play on Tuesday and Thursday. Morning lessons and drills may be scheduled upon request and led by a group of volunteers. For specific information regarding pickleball opportunities on Tuesday and Thursday please contact tcpc@twincitiespickleball.org.

When playing pickleball, the serve must be hit underhand and each team must play their first shot off the bounce. After the ball has bounced once on each side, both teams can either volley the ball in the air or play it off the bounce. This eliminates the serve and volley advantage and prolongs the rallies. To volley a ball means to hit it in the air without first letting it bounce.

No volleying is permitted within the seven-foot, non-volley zone (called the kitchen). Players cannot executing a smash from a position within this seven-foot zone on both sides of the net. This promotes the drop volley or "dink" shot playing strategies, which makes pickleball a game of shot placement and patience, not brute power or strength.

Both players on the serving team are allowed to serve, and the team scores points only when serving. A game is played to eleven points and a team must win by two points. Points are lost by hitting the ball out of bounds, hitting the net, stepping into the non-volley zone when volleying the ball, or by volleying the ball before the ball has bounced once on each side of the net.

Players must keep one foot behind the back line when serving. The serve is made underhand. The paddle must pass below the waist. The serve is made diagonally cross-court and must clear the non-volley zone. Only one serve attempt is allowed, except in the event of a let (the ball touches the net on the serve and lands in the proper service court) then the serve may be taken over. At the start of each new game, the first serving team is allowed only one fault before giving up the ball to the opponents. Thereafter both members of each team will serve and fault before the ball is turned over to the opposing team. When a point is scored the server and partner change sides (right court to left court, etc.)

The court dimensions are 44' by 20' for both doubles and singles. The net is hung 36" on each end and 34" in the middle. A non-volley extends 7' on each side of the net. There remains 15' on each side of the court. On each side, these 20' by 15'' rectangles are further divided into two equal rectangles measuring 10' by 15'. When laying out the court, allow adequate space in each end and sides of the boundaries.

The City of Bloomington offers adult softball leagues in summer and fall for all levels of play, almost every day of the week! Games are played at Valley View Playfields and Dred Scott Playfields. Check out our adult softball page for detailed information! 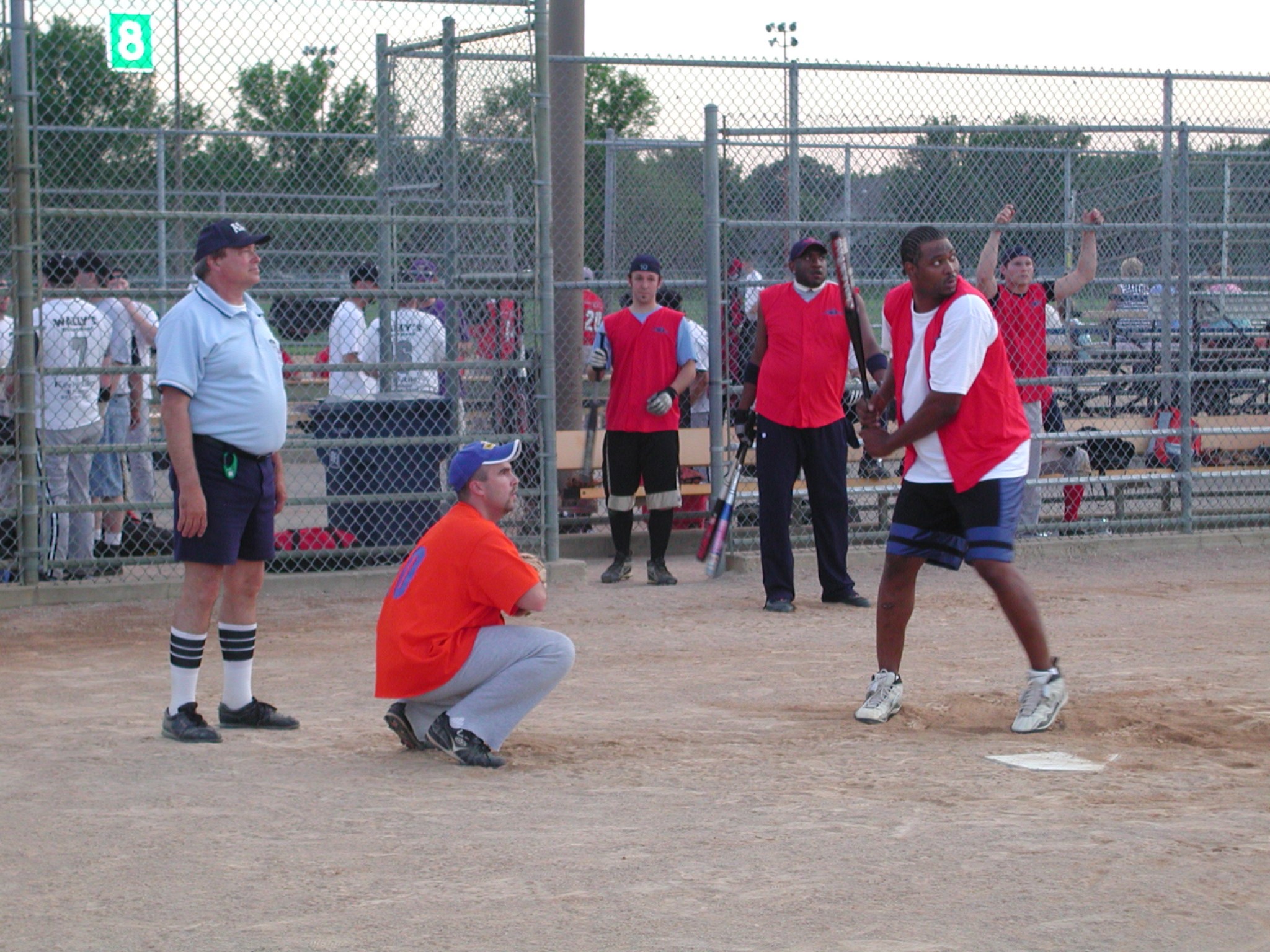 Leagues are a long-standing tradition in the city of Bloomington. Singles and Doubles leagues at a variety of ability levels are offered to both men and women. Leagues run June through August and take place at a variety of courts throughout Bloomington.

*Tennis court nets will be installed at Reynolds Park and Smith Park from approximately April until October, all other sites will have nets installed year round

Ever wanted to be the next Federer or Williams?! Learn the basics or master your serve, we offer two levels of instruction!  Beginner participants will receive a new tennis racquet with registration. Both sessions have beginner and intermediate lessons available.

Volleyball is offered on sand during the summer and indoors in fall and winter. Officiated Women's and Co-rec leagues are available for the fall and winter seasons and self-officiated Co-rec sand leagues are offered in the summer. Each season offers leagues with different levels of play to allow participants to choose the level of competition that suits their team. Please see designation definitions at the bottom of this section.

**For the self-officiated Summer Sand Volleyball leagues, a City staff member will be at the courts each night to provide equipment, collect scorecards and supervise play.

ALL LEAGUES (summer, fall and winter): Each match consists of 3 games played to 25 points using rally scoring system. All matches have a 1 hour time limit. Teams should plan to provide a warm-up ball if they desire. One ball will be provided for play per court during the season. An outside ball may be used during league play if both teams agree.

To assist teams in finding the appropriate Bloomington volleyball league for the upcoming season, the Parks and Recreation Division classifies its volleyball leagues with to Gold, Silver, and Bronze designations.  We will continue to sanction teams with MRPA at B, C, & D levels but does not designate leagues in that manner.  To help teams understand the new designations, league definitions are:

Gold Leagues:
Bloomington’s highest level of play, intended for teams seeking a competitive volleyball experience; additionally, players must have the ability to accurately call fouls on themselves.

Bronze Leagues:
A fun and recreational volleyball experience with a limited level of competition. 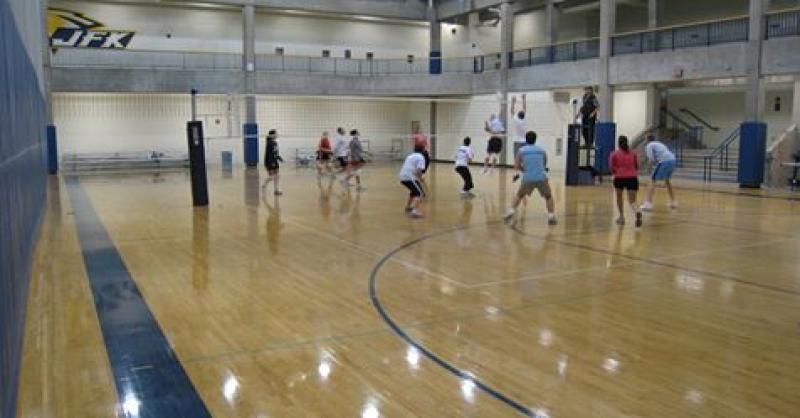 There are 5 ways to register for your adult sports league! The options are listed below. Registrations will not be accepted without full payment and completed registration form. Payments may be made with Visa, MasterCard, Discover, check or cash. Please see your respective sports informational page for information regarding fees, registration periods, transfers and deadlines.

Online – Register by submitting your information and payment through our online League Registration.

OR Download the appropriate registration form using the links below. Forms may be submitted in person, by mail, by email or by fax. Payment is due at time of registration.

By email – If you have the ability to scan your registration form, this works great! Just scan with credit card payment information and email it to parksrec@BloomingtonMN.gov. Processing may take up to two business days.

By fax – Fax your completed registration form and credit card information to 952-563-8715 (fax number). Please call 952-563-8877 to verify receipt of your registration. Processing may take up to two business days.

For standings and schedules, click on the link below. Log on as "Guest" (click the "Guest" button). Then use the "Find" menu at the top of the page to locate the information you are interested in.

Note: You can access the Online Registration page from anywhere on our site. It's listed in the "Arts & Recreation" menu in the strip running across the top of the page.

In order to be considered a resident team, 75% of the team members must reside or work in the City of Bloomington.

In the event of inclement weather, the following procedures will take place: