The overall goal for an ADA transition plan is to provide access to all.  As such, the city has developed a draft plan to make roads, sidewalks and trails more accessible, as outlined by the Americans with Disabilities Act (ADA). Learn more about ADA.

The transition plan provides a better understanding of the Bloomington assets in the right-of-way.  It includes pedestrian ramps with truncated domes to audible pedestrian signals and even obstructions like power poles in the sidewalk.  It will also help us develop our investment priorities in the future.

This infographic was produced in 2021. 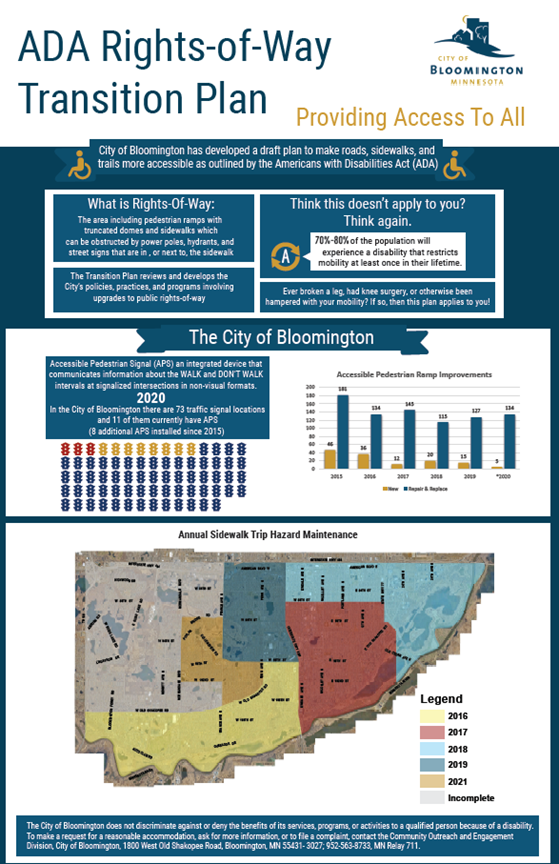 Textual description of above infographic

The above infographic depicts information and data relating to the City of Bloomington's draft plan to make roads, sidewalks and trails more accessible, as outlined by the Americans with Disabilities Act.

A block of text describes a Right of Way area as follows: "The area including pedestrian ramps with truncated domes and sidewalks which can be obstructed by power poles, hydrants, and street signs that are in, or next to, the sidewalk. The Transition Plan reviews and develops the City’s policies, practices, and programs involving upgrades to public rights-of-way"

An adjacent block of text asks, "Think this doesn't apply to you? Think again."  Beneath the text, a statistic; 70-80% of the population will experience a disability that restricts mobility at least once in their lifetime.  Additionally, a block text below described, “Ever broken a leg, had knee surgery or otherwise been hampered with your mobility? If so,  then this plan applies to you.”

A banner follows with the words, "City of Bloomington," followed by a graph stating "Accessible Pedestrian Signal (APS) is an integrated device that communicates information about the WALK and DON’T WALK intervals at signalized intersections in non-visual formats. As of 2020 the City of Bloomington has 73 traffic signal locations
and 11 of them currently have APS (8 additional APS installed since 2015)"

The last graphic on the bottom is a map of the city showing the progress the Street Maintenance Department has on correcting the trip hazards in the city. With roughly 80% of the city complete since 2015.

The block of text at the very bottom says, “The City of Bloomington does not discriminate against or deny the benefits of its services, programs, or activities to a qualified person because of a disability. To make a request for a reasonable accommodation, ask for more information, or to file a complaint, contact the Community Outreach and Engagement Division, City of Bloomington, 1800 West Old Shakopee Road, Bloomington, MN 55431-3027; 952-563-8733, MN Relay 711”

The Bloomington ADA Public Right of Way Transition Plan was approved by City Council on November 7, 2016, and is a living document that receives routine updates.

As part of the Bloomington ADA transition plan for public rights-of-way, the self-evaluation continues and approximately 100 pedestrian ramps were inspected in 2020.

Five new pedestrian ramps were installed and 134 removed and replaced in City right-of-way in 2020 as part of construction projects like the Pavement Management Program.

The Bloomington ADA transition plan for public rights-of-way was approved by Council on November 7, 2016 and is a living document that will receive routine updates. It is noted in the plan that the main body of the document will be updated five years after publication. Therefore, staff will be working on updates to the document in 2021.