The Penn American District Plan addresses the area along American Boulevard predominantly between Penn Avenue and I-35W, where major redevelopment will occur over the next two decades. With major transit investments expected to be made within the area, including I-35W Bus Rapid Transit (BRT) and the I-494/35W interchange rebuild, major changes in traffic flow are expected in the area.

The purpose of the plan is to guide the future land use, transportation, urban design and redevelopment of this important commercial center. 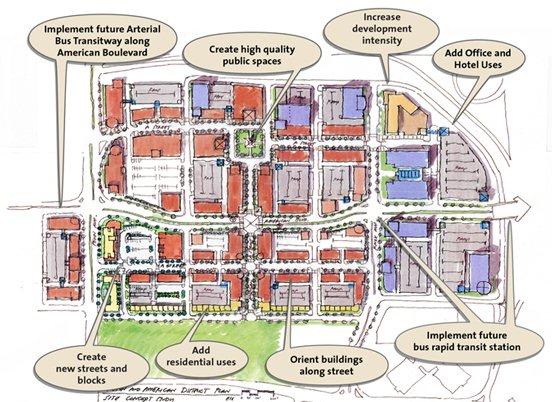 As part of the implementation process of the Penn American District Plan, zoning changes are proposed for most of the parcels in the District. Recommended zoning designations were selected that most closely reflect the existing property use and achieve the Plan vision.

At the January 26 meeting, the City Council adopted the Penn American rezonings, except the rezonings (Cases 10940FG-14) for the Kraus Anderson owned parcels (Southtown Shopping Center, Lucky's and Mitsubishi) and the City of Bloomington, Jiffy Lube and Wedding Day Jewelers rezonings (Case 10940E-14). These rezonings were continued to the August 3, 2015 meeting to allow for greater discussion.

At the August 3 meeting, the City Council adopted the final Penn American rezonings and approved an amendment to Southtown’s Development Agreement, granting additional flexibility from the zoning regulations.