The Bloomington City Council adopted the South Loop District Plan on August 21, 2012. The Metropolitan Council adopted its review record of the plan on February 13, 2013. 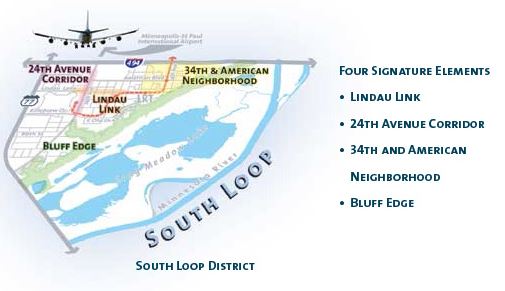 Over the next 40 years, two-thirds of Bloomington's growth potential will be realized in the South Loop District. The vision for South Loop is to transform the District from suburban to urban. The vision includes mixed land uses that support additional streets to enhance circulation; higher densities of jobs and homes close to two light rail stations; and sustainable development practices that save energy and support growth.  The South Loop District Plan will guide future land use, transportation, urban design and redevelopment of this important commercial and employment center. One objective of the district plan is to establish a distinct mixed-use district that takes advantage of South Loop's unique location adjacent to the 12th-busiest airport in the United States and a National Wildlife Refuge.

As part of the implementation process of the South Loop District Plan, zoning changes are proposed for about half the parcels in the District. Proposed zoning changes fall into three types:

Recommended zoning designations were selected that most closely reflect the existing property use or to best reflect desired future uses.