Banner
Sections
If it is built in Bloomington, it will be bold and big – by Mayor Tim Busse
Read March 25, 2022 message ...

March 25, 2022 – A large indoor waterpark has been in the plans at or near Mall of America since the mall project was conceived in the 1980s. In 2018, the City Council and Port Authority started work in earnest to find a way to deliver the water park project.

Bloomington has a long history of making bold decisions. When faced with an empty Met Stadium in the late 1970s, Bloomington leaders considered their options and seized on the bold vision for that site – the grand venture that is Mall of America (MOA). It has grown and evolved even as retailing and traditional malls have faced challenges. MOA is thriving today.

And beyond MOA itself, the growth of Bloomington’s economy over the past 30 years is vindication that the bold decision was the right one. Unique amenities in and around MOA, including now the proposed water park at MOA, continue to pay dividends by attracting many new businesses, hotels, and restaurants to entertain and service our large number of visitors.

Hospitality is the largest industry in Bloomington and, when combined with MOA, makes up more than 20 percent of the City’s revenues. A healthy and thriving hospitality industry significantly reduces the overall tax burden for Bloomington residents and businesses. The vitality in our South Loop District has, in fact, been essential to the City’s ability to successfully attract other businesses to diversify our economic base. We believe Bloomington has one of the strongest economic development track records in the region. And our strength in hospitality has been essential to the overall metropolitan area’s ability to attract events like the Super Bowl, the Ryder Cup, and the Women’s Final Four that will be here in just a few weeks. We are proud to be a regional partner.

The proposed water park will be a regional amenity that will be visited by people from all over and bring tax dollars to the area. The project would be the largest indoor water park in North America; a Disney-level attraction that will see about one million visitors annually. Nearly 40 million people go through the doors of MOA every year and this water park will add to the entertainment and tourism mix for the city, which we are proud to say includes the existing Great Wolf water park (think clustered amenities like Wisconsin Dells).

This water park will be privately financed. If for some reason the water park does not go as planned, Bloomington taxpayers will not be on the hook. But large projects like this often need subsidy. In fact, look no further than Great Wolf, which built another of its water parks in Garden Grove, California, which is smack in the middle of the highly competitive southern California hospitality and tourism industry. There, Great Wolf asked for and received a $100 million public investment to make its $250 million dollar project pencil out. And it has been a success: The Great Wolf property in Garden Grove is among the city’s top tax generators.

The approval by the Bloomington City Council and Port Authority on March 9, 2022, provides the proposed project a subsidy in the form of Tax Increment Financing (TIF). TIF funds are property tax dollars generated by the project itself. The lion’s share of the TIF funding will go to public improvements that are traditionally funded by TIF, including items such as roads, infrastructure, and parking. TIF investment in Minnesota has been a way to get projects done that would not happen otherwise. History has shown those investments are good for Minnesota.

We are thoughtful about these bold decisions and have had tremendous success, which explains why the City Council and Port Authority of Bloomington have decided to help the water park project move forward. We will continue to be open to innovative ways to ensure that our strong hospitality sector can be a vibrant partner for the entire state of Minnesota.

Why the City supports the MOA water park project

Hospitality and MOA in Bloomington make up more than 20% of City revenues, so helping Bloomington’s largest industry is important.

The investment of Tax Increment Financing or TIF into the MOA and waterpark is largely for infrastructure (mostly parking) that is shared among the many MOA components (retail, entertainment, office, hotel).

TIF can only be used for reinvestment in these MOA projects by state statute, and it is a portion of the property taxes that the MOA pays (and water park would pay)

In general about TIF: 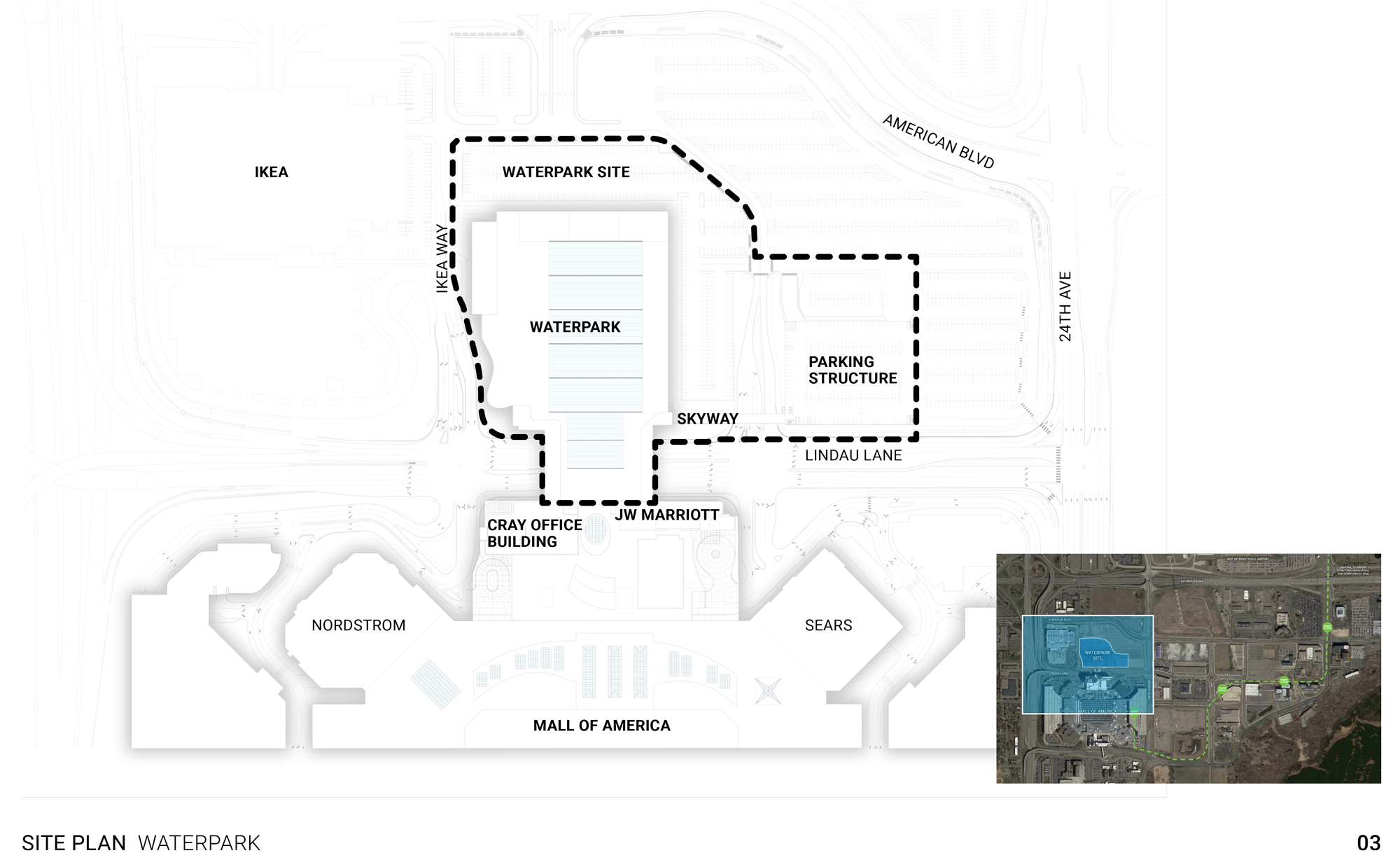 View a larger version of this map

Frequently asked questions
What is the water park project?

The water park project in South Loop would be one of the largest indoor water parks in North America with a building footprint of approximately 250,000 square feet and a total area including all interior multistory floor areas around 335,000 square feet. The project would cost approximately $250 million. The West Edmonton Mall (WEM) in Canada (which the MOA is somewhat modeled after and is also owned by Triple 5) has a 215,000 square foot integrated/attached water park that brings in more than 500,000 users annually. The WEM water park adds to the vibrancy and resiliency of that large mall. Not only does the WEM water park have slides and other rides, its large wave pool hosts evening beach-themed gatherings and surfing leagues, allowing for greater use of the venue.

The water park would not only add a new amenity to Bloomington, but to the entire Minneapolis-Saint Paul region. It would also create new demand for hotel rooms. The proposed South Loop water park would be open to the public.

What would be the City’s and Port Authority's involvement, and why?

Prior to the pandemic, the City and Port Authority were studying a nonprofit ownership and financing model. On March 9, 2022, the City Council and Port Authority approved moving forward with a model that is privately financed, similar to many other projects the City and Port have done, while investing TIF into the project. The TIF investment reinvests property taxes generated by MOA and the water park itself to, in large part, fund public infrastructure (mostly parking costs).

Why does MOA want a water park?

Triple 5 (owner of MOA) was a pioneer in building large retail malls which were also diversified with entertainment and restaurants. Retail continues to change in the age of Amazon, and new projects that Triple 5 is building have about a 50% non-retail component. MOA has performed much better than most bricks and mortar retail developments due in part to its entertainment and tourism focus, but continuing to diversify the MOA project with new traffic generators (e.g., attached hotels and office as well as more entertainment opportunities) is a top priority for Triple 5. MOA is about 70% retail today.

Triple 5 has been interested in having a water park attached to the MOA project since the original 1980s. It’s proven to be an asset to the West Edmonton Mall, helping that mall stay competitive. Triple 5 also has a water park as part of the American Dream New Jersey project (a large retail and entertainment project similar to West Edmonton Mall and Mall of America).

When would construction start?

If Triple 5 is able to secure all the private financing needed, the project would start construction in 2022, with an opening about two years after the construction starts.

Are city property taxes going to go up or be at risk for the water park?

No. If the project does not perform as Triple 5 has projected, the private debt holders are at risk, not the other Bloomington taxpayers.

What formal actions have the City Council and Port Authority taken related to the water park project?

March 6, 2018
Staff and representatives from Triple 5, owners of Mall of America (MOA), updated the City Council and Port Authority on the status of development for future phases of MOA. The focus of that meeting was on the potential to develop and construct a large indoor water park, which would be connected to Mall of America. At that time, City, Port and Triple 5 were exploring a number of different ownership and financing structures for the water park, including one where the City would own and issue debt for the project, using revenues from the water park to pay for the water park’s debt payments. In the aforementioned financing model, which was not ultimately furthered, Bloomington residential property taxes would not have been at financial risk for the project. Work continued in the summer and fall of 2018 to find a financing model where the City and Port further limited their risk; this included numerous staff and developer meetings, and extensive legal analysis.

November 1, 2018
Staff presented a proposed water park financing model using a nonprofit as the borrower and owner. Triple 5 would develop the water park with the Port Authority. They would also manage the water park through a contract with the nonprofit. The Council and Port directed staff to continue studying the nonprofit model outlined.

January 31, 2019
Staff presented a further refined version of the nonprofit model, and the Council and Port directed staff to perform further due diligence and bring back a Development Services Agreement for consideration at the next concurrent meeting of the City Council and Port Authority.

July 1, 2019
The Council and Port passed resolutions moving forward with Provident Resource Group as the nonprofit entity that would create the special purpose Minnesota nonprofit entity to borrow, construct and own the water park.

August 12, 2019
Provident attended a concurrent meeting to review Provident’s business model. Staff provided the Council and Port an update of the ongoing project feasibility review process. No action was taken by the Council or Port.

October 29, 2019
The City Council and Port Authority passed a resolution approving the Nonprofit Agreement. The agreement formalizes the relationship between the City/Port and Provident for the project. Key points of the agreement include establishing the members of the Board of Directors for the Nonprofit Entity (Provident-4 and City-1), outlines members of the Project Advisory Committee (BCVB-1, City-1, Port-1, Management Company-1, and Provident-4).

November 12, 2019
The City Council voted to change the ordinance and pass resolutions necessary to allow the Special Taxes to be a backstop for the water park debt. This does not obligate the City to any action except to ‘turn on’ the taxes if the water park does not produce the revenue is it projected to generate.

April 8, 2020
The World Health Organization declared a pandemic on March 11, 2020. The waterpark project was put on hold.

September 8, 2021
The City Council and Port Authority passed motions directing staff to work with Triple 5 to study a private financing option that would use legislation signed into law in Minnesota in 2021 that provides a temporary easing of restrictions on the use of TIF due to COVID-19. The boards also wanted to continue to keep the nonprofit option on the table and directed staff to continue consulting studies.

November 10, 2021
The City Council and Port Authority, in closed session, discussed terms to either purchase or buy an option on the adjoining lands (31 acres directly east of MOA, currently a parking lot) to provide a core site for EXPO 2027 and to provide liquidity for Triple 5 for investment in the privately financed waterpark project.

December 9, 2021
The boards approved the water park financing and adjoining lands option term sheet and directed staff to develop agreements and documents based on the term sheet using TIF as a subsidy to MOA and the water park.

March 9, 2022
The City Council and Port Authority approved key development agreements allowing for the investment of TIF into the water park project and shared public infrastructure.