Bloomington's South Loop District is a distinctive urban center where people build their lives around work and community. It's a trendy neighborhood at the crossroads of the metro area's transportation networks, yet it's only moments away from the quiet, unspoiled beauty of the Minnesota Valley National Wildlife Refuge.

The South Loop District is not a retreat from modern life, but a confluence of environmental and economic forces. The District is a center for business and employment, connected to the Twin Cities metropolitan area by adjacent freeways and convenient transit, and to global centers such as Amsterdam, Tokyo, Paris, and London via direct flights from the nearby Minneapolis-St. Paul International Airport.

Why does South Loop prosper? Because it has unparalleled connectivity; it is a regional center for commerce; and it brings together urban development and natural resources in one place.

About the South Loop District

Build on the District's unique mix of assets.

Transform the District's densities and character from suburban to urban.

Establish and promote the District as a branded place emphasizing sustainability, quality, safety, and comfort.

Creative Placemaking is an emerging field that works to build vibrant, distinctive, and sustainable communities through the arts. It engages artists and others in building social fabric and local economies while making physical, place-based improvements, leveraging the distinctive character and creative and cultural resources of each place.

Over the next 40 years, two-thirds of Bloomington's growth potential will be realized in the South Loop District. Put simply, the vision for South Loop is to transform the District from suburban to urban. The vision includes mixed land use that supports additional streets to enhance circulation; higher densities of jobs and homes close to four light rail stations; and sustainable development practices that save money and support growth.

A commitment to sustainable development is the foundation of the South Loop District Plan. The Plan describes the City's approaches to transit-oriented site design, storm water management, South Loop's interface with the Minnesota Valley National Wildlife Refuge and energy efficiency.

South Loop's got it. The district is adjacent to MSP airport. The Hiawatha Light Rail line runs through its heart. It is home to the Mall of America, one of the most visited destinations in the nation. It sits next to two of the region's arterial highways. Its south and east borders provide access to the Minnesota Valley National Wildlife Refuge's wooded bluffs, welcoming meadows and peaceful marshlands. 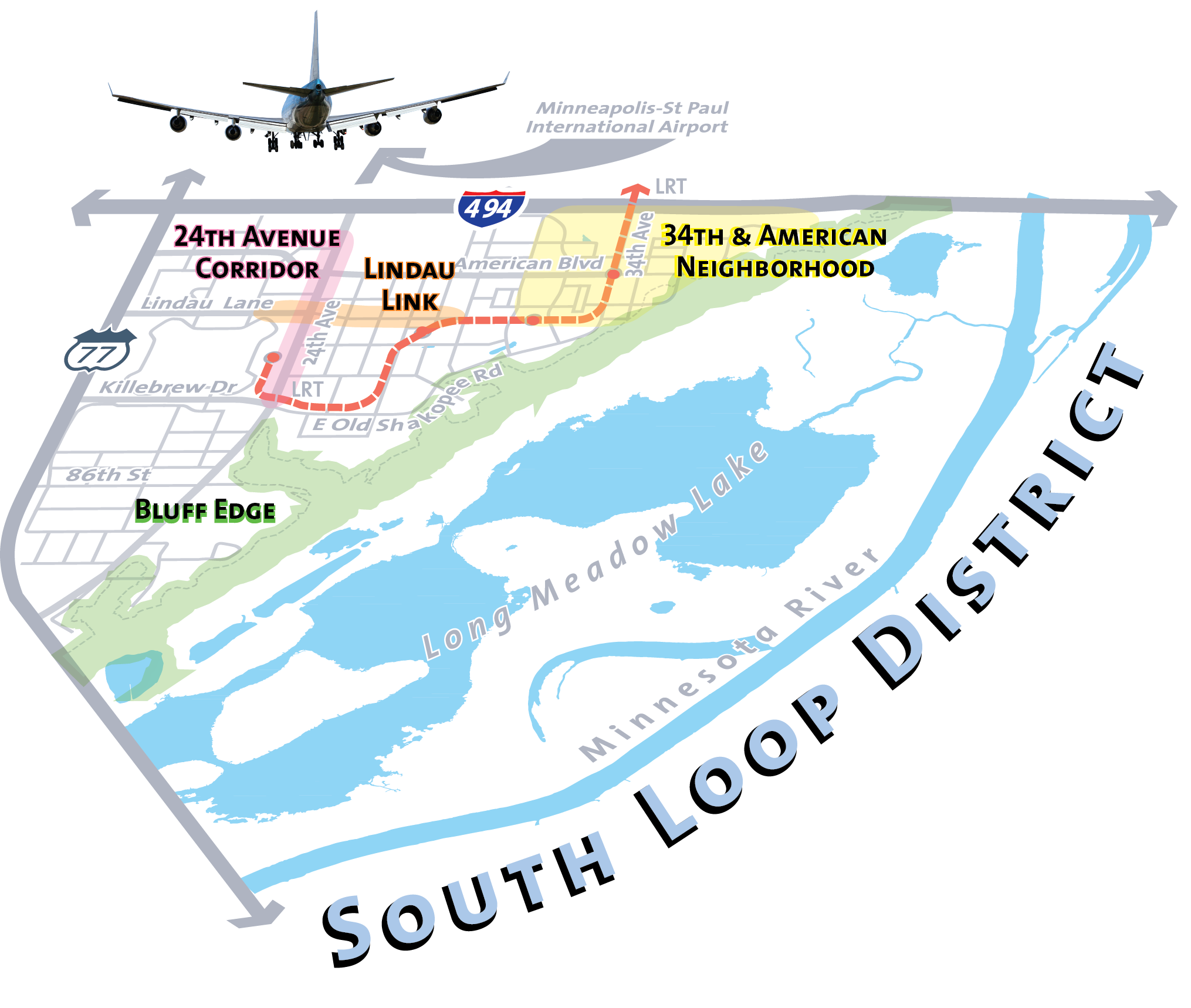 The Bloomington Chamber is committed to addressing the needs and concerns of businesses in the city of Bloomington. The Chamber also promotes the community at its monthly membership meetings.

The Bloomington Convention & Visitors Bureau is the marketing arm for Bloomington, Minnesota, and aggressively markets the city, area attractions, and the surrounding communities to visitors around the world.

The Bloomington Port Authority coordinates orderly commercial and industrial development throughout the City. Its current efforts are concentrated on the McGough transit-oriented development, Mall of America Phase II and the South Loop Development Area.

The Bloomington Theatre and Art Center and the City of Bloomington have embarked on a project to promote Creative Placemaking in the South Loop District with project partners including the Mall of America, McGough, Bloomington Convention and Visitors Bureau, and others. The project is being supported through a National Endowment for the Arts grant.

Bloomington is a community that people seek out as a place to live, conduct business and recreate. We have achieved this status by creating vibrant, safe, welcoming neighborhoods and by working together with our neighbors to promote the fun and vitality of community life.

By putting the customer first, Hennepin County employees work every day to achieve our mission, vision and goals. We strive to improve our services through proactive, innovative public stewardship.

Since opening in 1992, the Mall of America has revolutionized the shopping experience and become a leader in retail, entertainment and attractions. Mall of America is one of the top tourist destinations in the country as well as one of the most recognizable brands.

The Metropolitan Council is the regional planning agency serving the Twin Cities seven-county metropolitan area and providing essential services to the region. The Council is committed to environmental stewardship, sustainable solutions, and reduced energy use.

Metro Transit is the transportation resource for the Twin Cities, offering an integrated network of buses, light rail and commuter trains and resources for those who carpool, vanpool, walk or bike. Each weekday customers board Metro Transit buses and trains about 250,000 times.

Not more than 10 miles from downtown Minneapolis, the Minnesota Valley National Wildlife Refuge was established in 1976 to provide habitat for a large number of migratory waterfowl, fish, and other wildlife species threatened by commercial and industrial development.