There are currently no traffic studies being conducted.

Hennepin County, in partnership with the City of Bloomington, is developing a striping plan for an upcoming repaving project for 2.30 miles along Nicollet Avenue (County Road 52) between American Boulevard and Old Shakopee Road (County Road 1). This provides an opportunity to re-evaluate the current striping of the roadway to ensure that it better meets the current and future needs of people walking, biking and driving through the corridor.

The purpose of the corridor study is to explore options for improving roadway safety and
operations and to address the current and future needs of autos, pedestrians, bicyclists,
and transit. Alternatives being considered include converting Portland Avenue from two
lanes in each direction, to one lane in each direction with a two-way left turn lane in the
center and bike lanes (this would require the removal of the limited on-street parking.)

A study of the traffic circle installed at the intersection of 101st Street and Utah Avenue is ongoing.  City staff has collected traffic data consisting of speed, volume, crash history and conducted a resident survey.  This data will be compared to data collected before the circle was installed.  A final report is due in 2015

The City of Bloomington is completing a traffic study on W 84th Street between France Avenue and Penn Avenue. The study is in advance of future PMP project in the area when we would have an opportunity to make improvements along the corridor and at the Xerxes Avenue intersection.

Recently the City of Bloomington was awarded federal grant money as part of the Efficiency and Energy Conservation Block Grant (EECBG). One of the projects selected for completion with this grant money was the 86th Street Multi Modal Traffic Study.

This study will develop a preliminary design for balancing vehicles, pedestrian and bicycle needs for the 86th Street corridor from Xerxes Avenue to East Old Shakopee Road. This corridor was identified in the Alternative Transportation Plan (ATP), dated July 7, 2008, as a primary east-west corridor in the City for bike and pedestrian activity. The corridor will provide a connection to trails and destinations such as city parks, regional park connections, schools, commercial and employment areas including the Mall of America, and bus routes.

Interim Recommendation (Council approved 6/7/10)
The interim recommendations will be implemented along with the planned maintenance (seal coat) project this summer. The City of Bloomington will be converting the striping on the corridor from the existing 4-lane configuration (2-lanes in each direction) to a 3-lane configuration (1-lane in each direction with a continuous dual left-turn lane, and a bike route on each side). The change will not affect the intersection of Lyndale Avenue, where the bike route will end and there will be a "Share the Road" section as you approach this intersection from both sides. Some signal modifications will be needed at the Nicollet, Portland, 12th Avenue and Cedar intersections.

East Bush Lake Road Intersection
The recommendation falls right in line with the signal system construction project proposed by Hennepin County for 2015. As part of the study results, the City encourages the County to make any minor alignment improvements possible as part of the signal replacement and overlay project. The City will also work with Hennepin County identify opportunities to construct a southbound right-turn lane/bay at East Bush Lake Road and W 86th Street to safely serve the large number of southbound rights at that location.

West Bush Lake Road Intersection
This intersection will remain a 4-way stop. The City will review the southbound left turn lane capacity and need in the future when an opportunity arises to modify it.

The first open house was held at the Richardson Nature Center.

The second open house was held at Peace Lutheran Church. 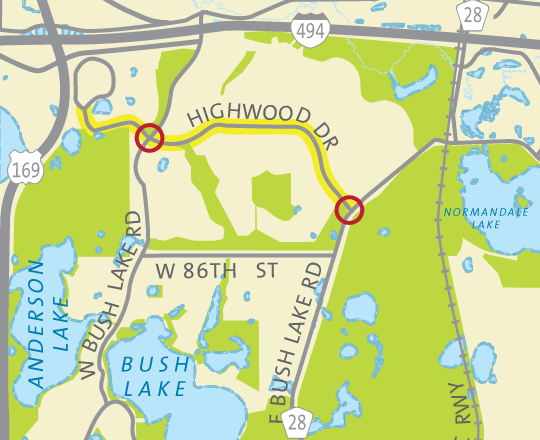 Questions or comments about the reports listed above should be directed to:

Reconstruction of the intersection is being designed and planned for Summer 2010.

Reconstruction of the intersection is being designed and planned for Summer 2010.

Input surveys have been mailed out to the Poplar Bridge Neighborhood. We ask that the residents return the surveys by November 19, 2008. The purpose of the survey is to gather input from the neighborhood residents regarding the temporary turn restrictions and entry treatments.

Temporary entry treatments along with turn restrictions will be installed at the intersections of Poplar Bridge Road/90th Street and Nine Mile Creek Parkway, Stanley Avenue and 84th Street, and Poplar Bridge Road and France Avenue. They will be in place long enough for staff to collect traffic data in the neighborhood and removed prior to the first snow fall. Total time of installation should be approximately 30-45 days. Within the 30-45 days we will install the trial devices then allow two weeks for normal traffic patterns to emerge, collect data and remove the devices.