The Minnesota Pollution Control Agency (MPCA) has issued a draft permit to continue phased expansion of the Burnsville Sanitary Landfill.  The MPCA is accepting comments on the draft permit until 4:30 p.m. on September 6, 2022.  Submit comments and review additional information at:  https://www.pca.state.mn.us/waste/burnsville-sanitary-landfill-expansion-project

The Burnsville City Council unanimously approved the expansion on August 16, 2022. The City of Bloomington has significant concerns with the proposed expansion and filed  a comment letter with the City of Burnsville requesting denial. Mayor Busse and Councilmember Nelson testified in opposition at the Burnsville public hearing.  Burnsville’s webpage on the expansion is available at: https://www.burnsvillemn.gov/2336/Landfill-Applications

Size Comparison (at full build out) 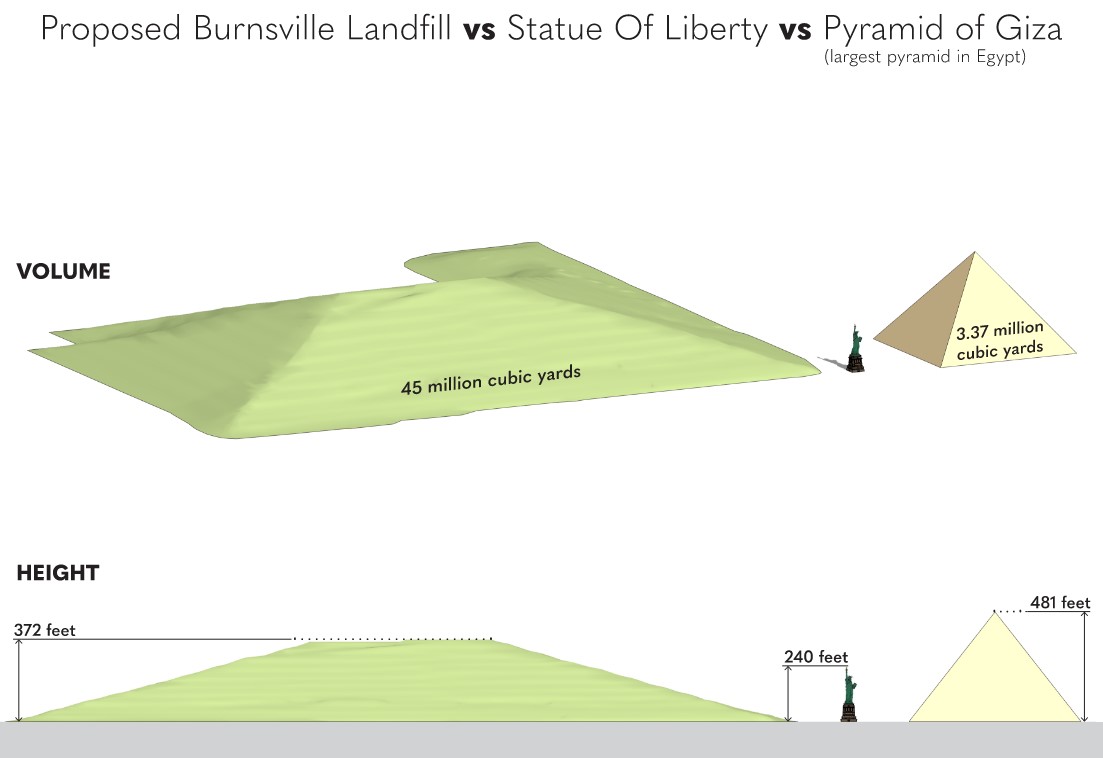 There are three landfills in Burnsville near the Minnesota River on Bloomington's southern border.  The Burnsville Sanitary Landfill, one of two active landfills in the seven county metro area, is active, partially unlined and proposing a significant expansion.  The Freeway Landfill and Freeway Dump are closed, unlined and at risk of polluting the Minnesota River and the drinking supplies of Burnsville and Savage.  The federal Environmental Protection Agency has designated the Freeway Landfill as a Superfund Site.

Bloomington received notice of a proposal in the City of Burnsville to significantly expand the Burnsville Sanitary Landfill, which is across the Minnesota River immediately south of the Dwan Golf Course.

The City of Bloomington has significant concerns about the expansion including groundwater contamination, visual impact, locating additional waste in a sensitive ecological area, noise, odor, escaping trash, among others.  The City of Bloomington submitted numerous comment letters to the City of Burnsville and Minnesota Pollution Control Agency (MPCA) in opposition to the expansion and testified in opposition at Burnsville public hearings (links to letters and video below).

On February 25, 2019, the Burnsville Planning Commission unanimously recommended approval of and, on March 5, 2019, the Burnsville City Council unanimously approved a Concept PUD Plan for the landfill expansion.  In late 2021, the MPCA approved a Certificate of Need to allow seven years worth of additional expansion, pending environmental reviews and final permitting.  As of early 2022, the MPCA finalized the Supplemental Environmental Impact Statement (SEIS) for the expansion.  The project is now in the final permitting stage through both the City of Burnsville and MPCA.

Although the City of Bloomington has no approval authority over the expansion, the City will continue to monitor these reviews and express concerns.

City Comment letters on the expansion include the following:

The MPCA allows landfills in Minnesota to expand only after issuance of a Certificate of Need (CON).  Often, CONs are issued based on estimated landfill demands over the next 5-10 years.  In late 2021, the MPCA approved four CON applications from landfills in the metro area, including an application from the Burnsville Sanitary Landfill.  More information is available here.

The visualization below, created by Bloomington staff using Google Earth, shows the size of the proposed landfill. The point of view is looking southward along Xerxes Avenue towards Burnsville.

The location of the Burnsville Sanitary Landfill is shown in yellow in the aerial photo, below. The photo was included in the plan submitted by the developer to the City of Burnsville. Click on the image to view it in greater detail. Use your browser's "back" button to return to this page. 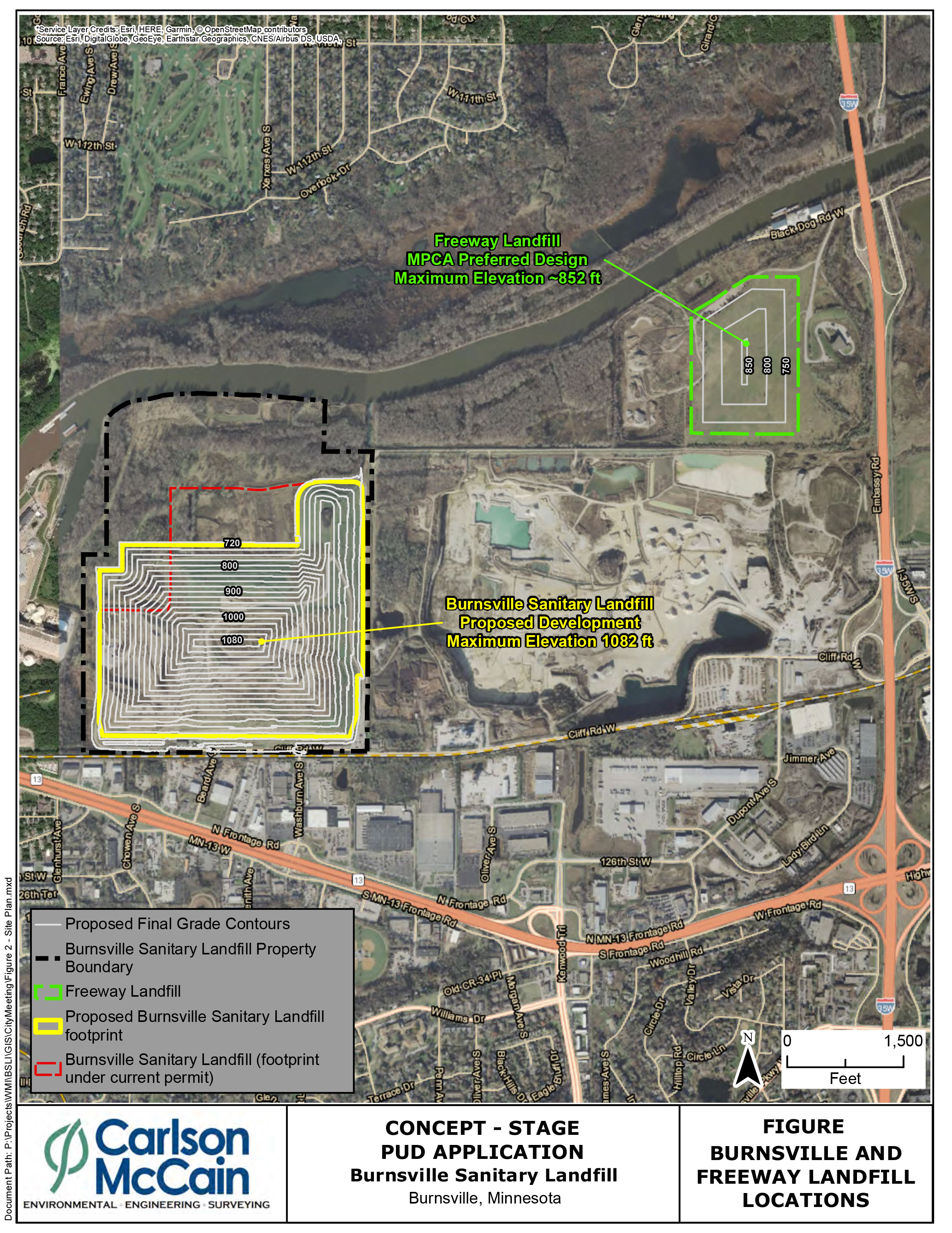 Text description of this aerial image

This image is a map made using an aerial photo of the northwest corner of Burnsville. The map includes the Minnesota River along the north edge, Highway I-35W along the east, and Highway 13 along the south.

The map shows a roughly rectangular, yellow-colored area near its western edge, northwest of the intersection of the two highways. The yellow area is the location of the proposed landfill project. The area is labeled, "Burnsville Sanitary Landfill / Proposed Development / Maximum Elevation 1082 ft." The northernmost boundary of the landfill area is about 1,000 feet away from the Minnesota River.

Also visible, to the east-northeast of the landfill and adjacent to Highway I-35W, is a smaller landfill labeled, "Freeway Landfill / MPCA Preferred Design / Maximum Elevation ~ 852 ft."

Bloomington has significant environmental concerns regarding the Freeway Landfill and Freeway Dump. The MPCA is gathering bids on two potential approaches: Dig and Haul and Dig and Line.  The Minnesota Legislature will be asked to pick between the two options in 2022.  Bloomington favors the Dig and Haul approach.

Visit these links for access to City of Burnsville public meetings addressing the landfill, including meeting video and informational packets related to the project.