A snow emergency may be called by City staff any time conditions are warranted. The snow emergency remains in effect until the end of the snow event and resulting plowing activities.

A parking ban is in effect in Bloomington when the City of Bloomington declares a snow emergency.

During a parking ban, all vehicles must be moved from City streets until plowed full width. Moving your vehicle ahead of time will help avoid a last-minute scramble and the possibility of a ticket! Thank you for your help.

Snow-related parking bans remain in effect for 48 hours, or until the street you park on has been plowed full width (whichever occurs first). Cars parked on the streets during a parking ban may be towed.

You may call 9-1-1 to report a vehicle parked in violation of a parking ban. Please begin your call by stating, "this is not an emergency," to help the dispatcher understand the nature of your call.

For their safety, children should be instructed to NOT play on these banks or make tunnels in them. Between snowfalls, the City or Hennepin County may remove excess snow from the roadsides using large equipment. This would pose a grave danger to any kids who may be burrowed into snowbanks. 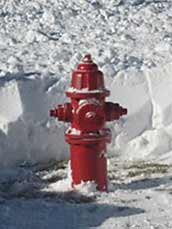 Adopt a fire hydrant and keep it clear of snow

Do a good deed for your community – clear snow away from the fire hydrants near your property. This provides quick access for firefighters and water maintenance and makes it easier to respond efficiently in case of an emergency.

Owners of private hydrants are responsible clearing the snow away from them, and are strongly encouraged to do so, in order to simplify locating the hydrants in an emergency.

Who is responsible for snow removal?

Snow removal is primarily the responsibility of the Street, Park and Facilities Sections in the Public Works Maintenance Division. In addition:

The City plows an average of 25 times per year.

The average cost for these services per household is about $43.20 per year.

The strategy used to plow streets, sidewalks and other City facilities depends on the interaction of several factors:

To make roads safer before snow falls, the City pre-treats streets with an anti-icing brine solution. The brine solution, a liquid mixture of salt and water that is sprayed on, prevents ice from bonding with street surfaces. Once the liquid solution is sprayed, it evaporates and leaves behind thin lines of salt. The salt prevents the bonding of snow and ice to the street so snowplows can scrape the street clean. This process reduces the amount of salt that needs to be applied when streets are plowed. The anti-icing process leaves several stripes of salt behind, making roads that have recently been de-iced easily identifiable.  Click here for more information on the Anti-Icing Production Upgrade which has significant improvements to the City of Bloomington's Anti-Icing/Brine making capabilities. The use of anti-icing technology reduces the amount of salt needed to clear snow and ice from city streets.

Park Maintenance is responsible for snow removal on over 260 miles of sidewalks throughout the city. We have 10 sidewalk snow removal units. Removal from a snowfall of 3-5 inches takes approximately four days to complete.

Sidewalks are sorted into three groups.

If snow falls over a long time period, the City may repeatedly return to priority one areas before clearing lesser-used areas. Residents are asked to be patient in such situations. Crews will complete the job, but it may take three to four days, depending on weather conditions.

Plows need to push snow off both sides of a sidewalk. In heavy snowfall, banks along walks may become too high for V-plow snow removal. In this case, snow blowers must be used extending the time for completion by at least 2-3 times. Obstacles in rights-of-way, either on or along sidewalks, i.e. timbers, boulders, shrubs or trash cans, hinder snow removal. The City appreciates your help in maintaining sidewalks and keeping rights-of-way clear of obstacles, so snow can be removed as quickly and efficiently as possible.