The information in this report is the result of a citywide online survey sent during June and July 2020, and represents a snap-shot look at the Bloomington rental market.  Rental surveys were sent to approximately 1,360 licensed rental properties in the City with the exclusion of boarding houses, single room rentals, hotel rooms and subsidized units.  Over 1,000 Landlords and apartment managers were contacted representing multi-unit apartment buildings, duplexes, for-rent single-family homes, townhomes and condos.  Approximately 250 landlords and property managers responded representing a total of 4,181 rental housing units in Bloomington.  Rental properties with more than three bedrooms were not included in the survey due to their small sample size.

Bloomington’s rental market is predominately composed of one, two and three bedroom units in multi-family buildings.  Larger units consisting of four or more bedrooms are found in single-family dwellings, including duplexes and townhouses.  The number of licensed single-family rental units has increased from 1016 in 2017 to 1743 in 2020 for an increase of 71.5%.

Data collected on the individual property surveys were compiled and weighted by the number of units to calculate the average vacancy rates and average rental rates. 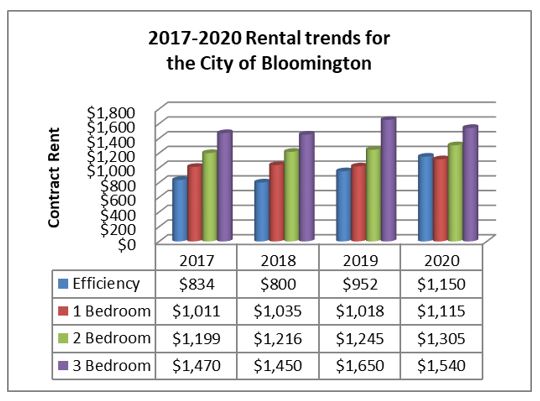 This year’s survey also tracked vacancy rates.  The table below shows a comparison of vacancy rates from 2016 to 2020.  The overall vacancy rate in Bloomington increased in 2020 which indicates movement towards a healthy vacancy market rate at 5%.  The following chart gives further detail to the 2020 vacancy rates, as well as a comparison to past survey results. 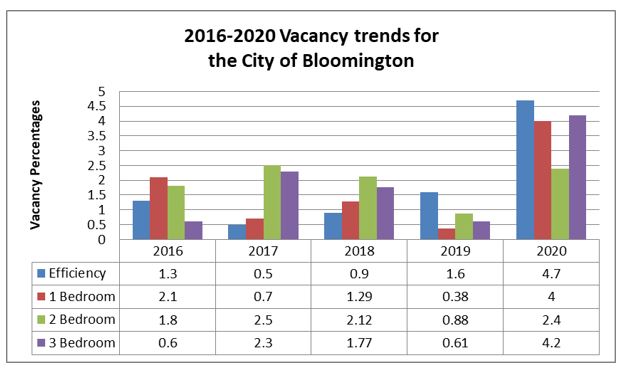