What are the cameras for?

The overhead cameras you see at a traffic signal are solely for detecting the presence of vehicles in order to provide the best distribution of green time based on traffic demand. They are cost-effective replacements for in-ground induction loops that are cut into the pavement.

The cameras are not focused on you the driver, but instead on your vehicle as it moves towards the intersection. As your vehicle enters defined areas or "zones" within the camera's field of view, the camera's processor detects a change in the "zone". An output is sent to the traffic signal's controller (the computerized "brain" housed in a nearby metallic cabinet controlling the intersection's timing) that says a vehicle is requesting green time for its direction.

Why are the cameras attached to the signals so high?

A higher mounting position allows for a better angle and wider view, which in turn generally allows for 1 camera to cover all lanes in a particular direction. Lower mounting heights (at signal indications' height) would not provide an effective image.

Who is watching me through these cameras?

There is no constant surveillance or archiving of these images. The camera view is a fixed focus, fixed location image (there is no zooming or moving the cameras once they are installed). The image is analyzed by the camera processor ONLY for the simple presence of vehicles within defined areas or "zones". The resolution of the image by these cameras is NOT good enough to read license plates or distinguish any facial features, as shown in a typical snapshot here: 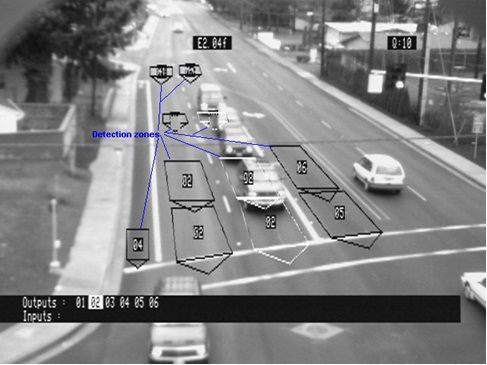 How long are the videos kept?

There is no recording of these cameras. The video is analyzed by the processor in real-time, with no storage whatsoever of the image stream. Any type of recordings that do exist are produced for diagnostic purposes and discarded after use

Are these cameras tracking my movements?

Absolutely not. The cameras are incapable of producing an image which renders any specific identification of the vehicle or driver. The camera processor's only function is to determine if a vehicle is within the predetermined "zones". It has no surveillance capability.

Why go through the extra expense of installing cameras?

Previously, the primary method of vehicle detection was done by cutting the pavement a few inches and installing a wire "loop" just below the surface. This "loop" is charged with a small electric current originating from the traffic signal control cabinet. As a metal object (i.e. vehicle) travels through the electric current's field, the change in the inductance from the metallic object triggers an output that a vehicle is within the "loop". The signal controller responds to this output with orderly green time.

These in-ground loops have both near-term and long-term costs. The labor for a work crew to saw-cut pavement while shutting down that lane of traffic, and the cost of material (wire, conduit, loop processors) are immediate costs. In the long run, additional costs pile up. The saw cutting of the pavement weakens its strength, resulting in shorter service life and more maintenance costs for pavement repair. When in-ground loops fail, the entire loop must be recut into the pavement again, so the labor and traffic disruption costs are renewed. Video cameras give us low cost options to change the detection boxes do to construction or lane shifts, pavement loops do not.

Video detection cameras, like most electronics, have seen their costs steadily drop since the technology was first introduced. Camera processors, like all computers, have increased their capability as prices drop. Installation is done above the surface of the road, and usually away from the flow of traffic. The pavement remains undisturbed and is capable of lasting longer. When cameras or processors fail, they are simply and quickly replaced without a great disturbance in traffic flow.

Comparing the overall costs of the in-ground loops vs. the overhead cameras today gives the cameras the edge. It is an efficient use of taxpayer money for the job they perform.