A free Sunset Block Party on September 18 will celebrate the WE Mural, a tapestry of murals curated and produced by Ua Si Creative, a collective started by Ka Oskar Ly, Christina Vang, and Teeko Yang that promotes culture, creativity and play to create meaningful experiences.

The WE Mural was commissioned by the City of Bloomington in partnership with Artistry, and will be completed in September. WE is located on walls surrounding an Xcel Energy substation, facing American Boulevard and 30th Avenue South in Bloomington's South Loop District. Artists include Marlena Myles, Martzia Thometz, Reggie LeFlore, Xee Reiter and Andres Guzman, and City Mischief featuring Thomasina Topbear.

The WE Sunset Block Party will include: 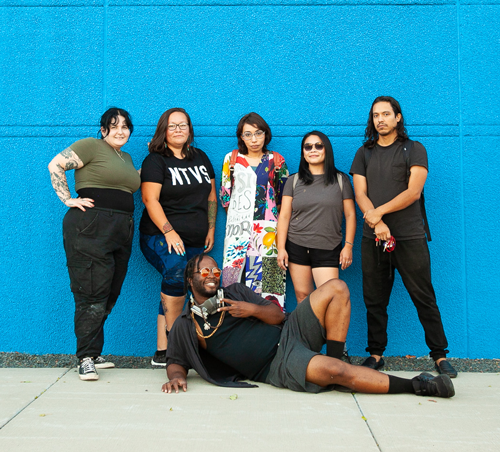 The City of Bloomington is continuing to monitor the COVID-19 situation as it evolves to protect the health and safety of the community. Please visit blm.mn/covid for the most up-to-date information on guidelines or cancellations.

The City of Bloomington does not discriminate against or deny the benefits of its services, programs, or activities to a qualified person because of a disability. To make a request for a reasonable accommodation, ask for more information, or to file a complaint, contact the Community Outreach and Engagement Division, City of Bloomington, 1800 West Old Shakopee Road, Bloomington, MN 55431-3027;952-563-8733, MN Relay 711.

About the South Loop District

South Loop is a rapidly developing neighborhood in Bloomington, which is adjacent to Minneapolis/St. Paul International Airport, and home to Mall of America, a 50-acre mixed-use development called Bloomington Central Station, and the Minnesota Valley National Wildlife Refuge. SoLo, as it is sometimes called, has seen a big uptick in the amount of residential redevelopment with eight projects in various stages of planning to leasing. The continued implementation of Creative Placemaking in SoLo will add new vibrancy to the district. For more information, visit blm.mn/southloop.

About Creative Placemaking in the South Loop District

The City of Bloomington in partnership with Artistry are working to build a sense of community in Bloomington’s South Loop through creative placemaking. Appointed by the City and Artistry, the Creative Placemaking Commission’s vision is that sustained creative placemaking efforts will establish the South Loop as a distinctive destination known for welcoming creative people and using the arts to transform the neighborhood physically, socially, and culturally. Goals include: Urbanism, Animation, Involvement, Identity, Leadership, and Investment. For more information, visit blm.mn/placemaking.

Artistry is an independent theater and visual arts nonprofit that serves a regional audience of more than 94,000 people annually. In pursuit of artistic excellence, Artistry engages the region’s most talented artists in work that welcomes and develops audiences and opens hearts and minds.

Artistry’s vision is a diverse, distinctive, and progressive community widely recognized for making art and artists essential to a vibrant social fabric and civic life.