You can click on the Bloomington Briefing link to get a list of all items.
Sidebar Paragraphs

Throughout the year, the City will present a timeline of Bloomington Fire Department history. Here are highlights from
this era.

Over the years, women have served in the fire service in various roles. After 20 years of service as a volunteer firefighter, Kathy Meyer was the first woman firefighter to retire from the BFD. Assistant Fire Chief and Fire Marshal Laura McCarthy has been with the BFD for 32 years. 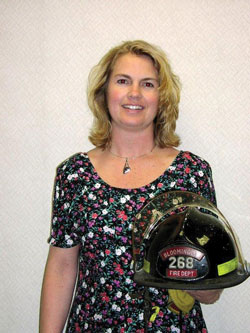 Meyer is a third-generation Bloomington firefighter. Her grandfather, Clarence Hecht, was Captain of Engine Company No. 1. He served on the BFD from April 1948 to August 1969.  Her father, Ken Hecht, and her uncle, Wyeth Hecht, were also on the BFD. When she joined the BFD in 1993, her father had one year until retirement, so they served one year together.

“At the time, I was working in Bloomington and going home for lunch one day when Engine 1 drove by me. At that moment I thought I could become a firefighter,” Meyer said. “I’m sure some of wanting to become a firefighter came from growing up and watching my dad. That same day I talked to my dad about the requirements of being a firefighter.”

She recalls her father told her two things.

“One: When there was a fire call, that I better always beat him out of the house. And two: Since I was the first person to arrive at the station, to be sure to open the garage doors right away so it was easy for everyone else to come in,” she said.

Meyer said her family was very proud of her and definitely her biggest supporter.

“I was the third woman to join the BFD.  There was definitely doubt that I wouldn’t be able to do the job even though I had passed the same tests and requirements that everyone else had taken when they joined,” Meyer said. “One way to remove doubt is to show others you can do the job, and that is what I did. I dedicated myself to the job.”

For Meyers, firefighting was definitely rewarding, because she was able to help others when they were in need.

“People were always so grateful for the service we provided even in the midst of their bad day,” Meyer said.

“Firefighting is a team effort. Each individual has a role and we all work together,” Meyer said. “I stayed 20 years because of the camaraderie. Everyone always had each other’s back.” 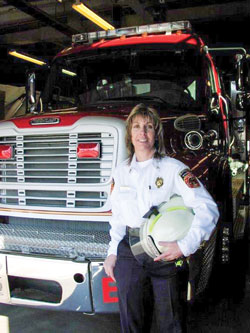 “I found out about Bloomington Fire Department from a coworker’s boyfriend (later husband) who was a volunteer for Eden Prairie Fire Department. His passion for the department and the fire service was infectious,” McCarthy said. “One Saturday, I stopped in and picked up an application. One month later, I was a member of the BFD and have never regretted it.”

McCarthy started as a paid-on-call firefighter. Through the years, McCarthy has held positions of firefighter, driver, captain, fire inspector I and II, fire marshal, district chief and deputy chief of training. In 2015, she was promoted to a full-time position as the assistant chief and fire marshal.

Pursuing a male-dominated career in the fire service meant that running into challenges was inevitable. Even finding gear, uniforms and equipment to fit her size was incredibly difficult.

“They didn’t have ‘women’s sizes’ or custom-measured gear. You had to find ‘standard’ sizes that would mostly work,” McCarthy said. “I learned to become very creative with duct tape.”

The challenge of doing something few women had a chance to do was motivating.

“The other was the stigma that women couldn’t do the job,” McCarthy said. “Lucky for me, the BFD was not that way, and the command staff didn’t tolerate that. They made sure I was treated like anyone else and given every chance
to succeed.”

McCarthy finds fulfillment in making a difference in people’s lives.

“The BFD makes a difference,” McCarthy said. “I enjoy the camaraderie with my firefighters. And I get to ride in a fire truck.”