Normandale Lake is located in the northwestern portion of Bloomington. The existence of the lake is the direct result of the Mount Normandale Lake Flood Control Project implemented in the early 1980s. Prior to this project, Hennepin County Ditch #1, which was established in 1904, conveyed Nine Mile Creek from the convergence of the north and south forks of the creek to just south of 98th street. Due to ditching, the storage potential of the natural marsh area (currently known as Normandale Lake and Marsh Lake) was not being fully utilized to mitigate flood flows. The resulting flood control project involved the construction of Marshack Dam across Nine Mile Creek to the west of Normandale Boulevard.

How was Normandale Lake made?

In 1979, a dam was built across Nine Mile Creek to reduce flooding. This resulted in a shallow lake less than 4.5 feet deep in most spots. Before that, the area was a wetland and farm fields.

Why is Normandale Lake so shallow?

The west side of the lake was originally a wetland. Because the lake was built for flood control, a permit from the Army Corps of Engineers was required. A deeper lake would not have received the permits needed for construction.

You've probably noticed a rotten-egg smell and algae growth in and around the lake. High levels of the nutrient phosphorous lead to unsightly algae growth and bad smells. Low oxygen levels can also contribute to unpleasant odors.

What kind of work will be done?

Water will be drained via pumps so the lake bottom will freeze during winter. Freezing temperatures kill the parts of Curly-leaf Pondweed (called turions) in the lake bottom that grow in the spring. The pumps are powered by diesel engines running at 1,800 rpm and will pump 4,600 gallons per minute. They should lower the lake level in 18 days unless there is heavy rainfall.

Because Nine Mile Creek flows through the lake, there will be some water left in the lake during this work. In spring 2019, the lake will be treated with herbicide to kill any Curly-leaf Pondweed that wasn’t killed and grew in the spring.

Will the trails around Normandale remain open?

Yes, the trails will remain open for people to use during the project.

When will the project take place?

Beginning in Fall 2018 and continuing through Spring 2019.

For updates on the project as it moves forward, please visit the Normandale Lake Improvement project webpage from Nine Mile Creek.

Won’t draining water from the lake be bad for animals?

Most animals will be able to leave on their own and seek safer spots while this works happens. We are working with the Department of Natural Resources to develop a plan to protect turtles and other wildlife. More information will be posted as the plan develops.

Water will remain in the lake during this work, since Nine Mile Creek flows through the lake. There will be a 3'-5' deep portion that won’t be drawn down (roughly shown as the dark blue area on the map below) where fish can reside. 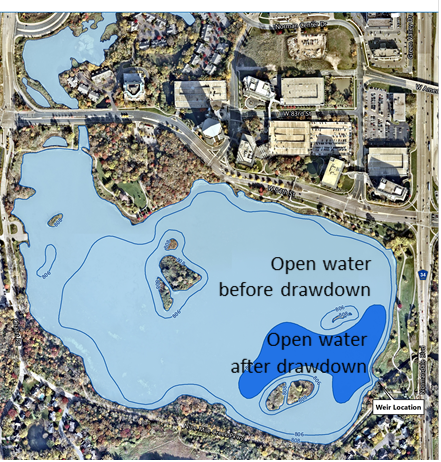 I walk around the lake every day.  What should I expect?

This fall you should expect less water in the lake than you are used to. After water is drained from the lake, existing plants in the lake will die.  As the plants break down, there may be a bad smell coming from the lake. In the spring you'll see cattails moving further into the lake. These will go away once water levels return to normal.

How long will the lake be empty?

We plan to start draining water from the lake in mid-August 2018. The lake will stay mostly empty until the beginning of March, at which point the lake will start refilling. With Nine Mile Creek flowing through the lake, it will only take 3-4 weeks to refill.

Why will the lake be empty for so long?

Is anything else being done?

Yes. An in-lake alum treatment will also be done. This work won’t be noticeable, but it will have many benefits. Alum is the short name for aluminum sulfate. It binds to phosphorous in the water so it can’t be used by algae for food. The bound phosphorous (called floc) drops to the lake bottom. The floc makes a layer on the bottom of the lake and keeps additional phosphorous that is stored in the sediment from being released into the water.

How long will the alum treatment last?

We expect this to last 7 to 10 years, which allows more time for work to be done upstream to reduce nutrients getting to the lake.

What will the lake look like when the work is done?

Normandale Lake will support plants growing over most of the lake bed. Our intent is to increase aquatic plant diversity and improve water quality, while reducing nuisance odors and algae blooms. We will continue to monitor the lake to assess the effectiveness of the project.

Is there anything I can do to help protect Normandale Lake?

Yes! Visit adopt-a-drain.org to find tips for protecting clean water. While you are there, you can sign up to adopt a storm drain near your house. By adopting a storm drain, you will receive a yard sign that will show your neighbors you care about clean water.

Providing flood control was the first priority of the Nine Mile Creek Watershed District.  The Marsh Lake Dam and creation of Normandale Lake were the first two projects implemented by the District.  Both projects were designed to control downstream flooding to protect human life and structures.

Both projects have proven their worth many times since they were constructed.  The biggest example of their value was in the 1987 super storm, when 14 inches of rain fell over Bloomington and Edina.  While parts of I-494 were under 12 feet of water, the berms and control structures of both Marsh Lake and Normandale Lake held, preventing significant downstream flooding and property loss.

On a smaller scale, the lake also has four storm sewer inlets directing stormwater into the lake.  The storm sewer network drains local streets and neighborhoods preventing localized flooding.  Unlike wastewater, the water that flows through any storm sewer system is not treated.  As a result, water that flows from the streets and properties into the storm sewer draining to Normandale Lake has the potential to carry fertilizer, sediment, pet waste, leaves, grass clippings, and other pollutants to the lake, regardless of whether the property is adjacent to the lake.

The watershed area that drains to Normandale Lake is over 21,500 acres and 27% is within Bloomington.  Other areas include portions of Hopkins, Edina, Eden Prairie, and Minnetonka.  Due to the large urban watershed, the lake is subject to significant inputs of stormwater runoff and upstream nutrient loading.  Nearly all land use practices within the lake’s watershed impact the lake and influence its water quality.  This has resulted in sediment and nutrient transfer, primarily phosphorus, from the watershed into the lake.  The entire contributing watershed is developed with land use illustrated in the pie chart.

Normandale Lake has a water surface of approximately 112 acres, a maximum depth of approximately 10 feet, and an average depth of 4.2 feet at normal water surface elevation of 808.0.  At this elevation, the lake volume is approximately 465 acre-feet or 152 million gallons.  The lake is shallow enough for aquatic plants to grow over the entire lake bed.  Water level in the lake is controlled mainly by weather conditions (snowmelt, rainfall, and evaporation) and by the elevation of the outlet control structure located on the east side of Normandale Lake.

Aquatic plants are found throughout the entire lake.  Plants are most dense near the inlet, and in the western and southern areas of the lake.  Within the lake, plants grow in an area known as the littoral zone – the shallow transition zone between dry land and the open water area of the lake.  In most lakes, the littoral area extends from the shore to a depth of 15 feet.  Shallow water, abundant light, and nutrient-rich sediment provide ideal conditions for plant growth. For Normandale Lake, the littoral zone represents the entire lake.

Prior to its creation, the lake has historically supported a significant population of aquatic vegetation.  Shortly after the lake was created, the City began operating a weed harvester, but limited results led to the weed harvesting program being terminated in 1996.  More recently the lake has experienced a decrease in aquatic plant diversity and an increase in undesirable, invasive plant species, particularly curlyleaf pondweed.  Currently the City treats the aquatic vegetation on Normandale Lake with aquatic herbicides to the extent allowed under existing permits.  The table below lists the aquatic plants found in Normandale Lake.

More information on the aquatic plants can be found in the Engineer's Report.

Curly-leaf pondweed – is a non-native, invasive submersed aquatic plant that was first observed in Minnesota in about 1910.  It can be distinguished from other native pondweeds by its unique lifecycle.  It is generally the first pondweed to come up in the spring and dies in mid-summer.

Coontail – is a native submersed aquatic plant that can become a nuisance in lakes with increased nutrient levels.  Coontail does not produce roots.  Instead, it absorbs all the nutrients it requires from the surrounding water and is capable of forming dense colonies covering large areas of water.

Water clarity typically improves with abundant underwater aquatic vegetation, such as coontail. Coontail can be considered desirable when managing for waterfowl and fisheries. The leaves and seeds of coontail are eaten by waterfowl, and it provides a home for a variety of aquatic insects. These insects then serve as food for many species of fish and waterfowl. However when coontail is excessive, undesirable effects can include a reduction of open water, creation of a "scummy" appearance, interfering with boating and recreation, and becoming invasive.

Filamentous Algae - is a mass of long, stringy, hairlike strands that grow towards the water surface.  These algae colonies begin their growth in the late winter and early spring on the bottom of the lake as a result of increased sunlight and warmer temperatures.  When mature, the colony rises to the surface where it has a slimy or cotton-like appearance.

Nuisance growth of filamentous algae can be an indication that a lake has excessive nutrients (usually phosphorus). Adopting preventative measures, such as limiting the flow of nutrients into the lake may help reduce the severity of nuisance conditions.

How will the project affect the lake's fish population?

The shallower water during the drawdown will expose more fish than usual to predators (egrets, heron, etc.) However, most of the fish are expected to follow the drawdown pipe downstream into Nine Mile Creek as the lake drains, or to overwinter in the 3'-5' deep portion of the lake that will remain after the drawdown (roughly shown as the dark blue area on the map below). The fish in the deeper waters of the creek and those in the remaining open water are expected to survive the winter.  The watershed district is working with the DNR on a restocking plan.