During the 2017 construction season MnDOT will be replacing the W. 86th Street Bridge over Highway I-35W. Replacement of the bridge became critical after an accident on I-35W caused structural damage to the bridge and the underlying utilities in February of 2016. Past accidents, due to vertical clearance issues, contributed to the decision to replace the bridge and increase the vertical clearance. The project will be managed by MnDOT and will be coordinated with City staff and any projects adjacent to the area. The project is expected to last from late June to October of 2017.

Throughout project construction updates will be displayed on this webpage and through E-Subscribe.

Crews have started punch list and restoration work near the bridge, which includes some minor repair of the noise walls adjacent to bridge that were affected during bridge rehabilitation.

Rehabilitation and maintenance work on the W. 82nd Street Bridge has been substantially completed, and the bridge has reopened to vehicle and pedestrian traffic. Punch list items and restoration work remain.

Rehabilitation work on the W. 82nd Street Bridge continues and will require a closure of the bridge early the week of November 27, Monday morning, and is expected to remain closed until late on Tuesday, November 28. The I-35W northbound and southbound ramps at W. 82nd Street will remain open during the closure and motorists will be guided with detours through the American Boulevard and W. 86th Street bridges. The closure will facilitate maintenance work for the pressure relief joints on the bridge.

MnDOT and their contractors reopened the W. 86th Street Bridge on Tuesday, November 14, 2017 to vehicle and pedestrian traffic. The new bridge will provide additional clearance over I-35W, increased sidewalk width and a decorative railing that can be seen from either W. 86th Street or I-35W. Additional restoration and cleanup work will still need to take place, but will be done while maintaining traffic on the bridge.

The rehabilitation work on the W. 82nd Street Bridge will continue and is expected to be completed in early December. 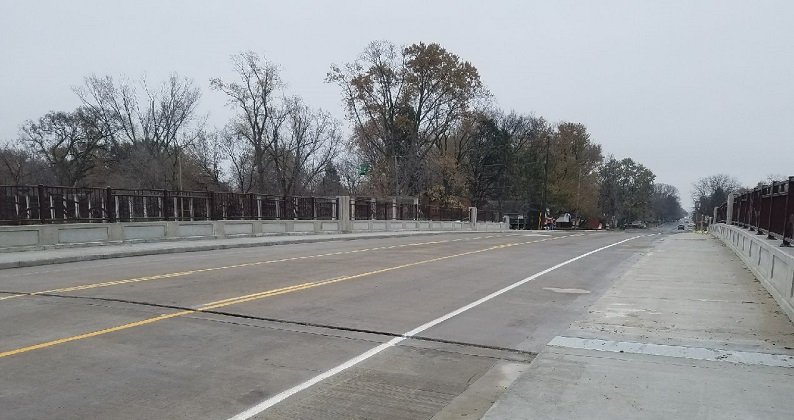 MnDOT and their contractors have opted not to close I-35W overnight on Friday, November 3rd. The closure will not take place and the work is expected to be completed with overnight lane closures. Forming of the bridge barriers for the W. 86th Street Bridge and the W. 82nd Street Bridge began early the week of October 30 and will continue into the week of November 6, as will construction of the bridge sidewalk and installation of the ornamental rail. Restoration work on the residential driveways and boulevards began early the week of October 30 and is expected to be completed ahead of the final paving for adjacent City roads.

Work performed on the adjacent city roads included excavation of the existing base and placement of rock aggregate base, installation of concrete curb and gutter, and fine grading of the rock base. Construction of barriers for the West 86th Street Bridge is scheduled for the week of October 30. Additional lane closures on the I-35W will be in place the night of October 30 to facilitate traffic control changes. On Friday, November 3, MnDOT and their contractors will be closing I-35W Northbound and Southbound between 10 p.m. and the 10 a.m. the following morning (Saturday). I-35W will be closed between I-494 and I-35E to allow for restoration and maintenance work. Currently, both the West 86th Street and West 82nd Street Bridges are scheduled to reopen by mid-November.

Work on the superstructure of the bridge continues for the W. 86th Street Bridge; this work will be followed by the installation of the bridge deck late the week of October 9th.

Work on the center pier continues as the contractor readies equipment to begin setting beams for the W. 86th Street bridge deck.  The beams will require that a direction of I-35 W be closed to accommodate the work; currently the contractor and MnDOT have scheduled to close the southbound direction on the night of September 27, followed by a closure of the northbound direction on the night of September 28.  The closures of I-35W are subject to change, barring delays or weather conditions.  Additionally, beams for the W. 82nd Street Bridge will also be placed during the scheduled closures.

Form setting and concrete work began for the center pier within in the median area and required additional overnight lane closures. Excavation of the existing road base for W. 86th Street and the affected side streets began this week and will continue into the week of September 18.  Additional storm sewer installations will also take place during the week of September 18.

Additional overnight lane closures were used on the I-35W for the majority of this week in order to place sheet piles necessary for earth retention of the center pier area. Work on the center pier will commence early the week of September 11. Concrete work on the east side abutment nears completion, with plans to backfill the abutment area early next week. Excavation of W. 86th Street and the side streets (e.g. Humboldt Avenue, Girard Avenue) affected by the bridge construction will begin late the week of September 11.

Additional lane closures on I-35W have been scheduled for the nights of September 5 – 8, from 9 p.m. until 5 a.m. the following mornings. Traffic on I-35W, in both the northbound and southbound directions, will be reduced to one lane as work continues in the median for the center pier.

Earlier this week, MnDOT coordinated with the contractor for several lane closures on I-35W, between the hours of 9 p.m. and 5 a.m. on the nights of August 30 and 31, to facilitate a working area for the center pier. Work on the west side abutment included the slope paving and backfilling efforts, while concrete work on the east side abutment continues.

A traffic control change on I-35W northbound and I-35W southbound near the W. 86th Street Bridge has been scheduled for the nights of August 30 and 31. Beginning at 9 p.m., traffic will be reduced to one lane for each direction, on the respective side of the center median. Lane closures will be removed by 5 a.m. the following mornings.

Storm sewer work on I-35W Northbound and Southbound was completed earlier this week in anticipation of paving scheduled for early the week of August 28. Excavation of the toe wall for the west abutment and subsequent slope paving was completed earlier this week, as work on the eastside stem and wing walls continues. A change in traffic control along I-35W is scheduled for mid-to-late next week, in order to begin work for the center pier.

Construction of the bridge abutments for the W. 86th Street Bridge continues on both the west and east abutments. A noise variance has been obtained to allow work in the area on Saturday, August 12, between the hours of 6 a.m. and 9 a.m.

Work on the W. 86th Street Bridge continues after the weekend closure as well as removal work on Humboldt Avenue and Girard Avenue.

Removal of the W. 86th Street Bridge, and removal of a damaged girder from the W. 82nd Street Bridge over 35W will take place the weekend of July 8th and 9th. Additionally, MnDOT will be conducting maintenance work on 35W south of Bloomington that will require a closure of 35W from 494 to the 35W/35E split. The closure will begin Friday night (July 7th) with all 35W ramps in Bloomington being closed at 8:00 PM and the full closure of 35W scheduled for 10:00 PM the same night. The closure is scheduled to end by 5:00 AM Monday morning (July 10th). Additionally, W. 82nd Street at the bridge over 35W will be closed until late Saturday (July 8th) and will be reopened with one lane in each direction.

The W. 86th Street Bridge over Trunk Highway 35W is scheduled to begin construction on June 26. The contractor has also scheduled a closure of 35 W between W. 82nd and W. 86th Streets the weekend of July 8 and 9 to accommodate the removal of the bridge and potential rehab work on the W. 82nd Street Bridge.